If a third party must decide: The reimbursement amount set by the Arbitration Board

Our latest blog post looks at how the Arbitration Board makes decisions and also provides an overview of decisions made in 2022.

A case that is sometimes not avoidable: The negotiation parties PC (pharmaceutical company) and the GKV-SV (National Association of Statutory Health Insurance Funds) cannot decide on the reimbursement amount for a pharmaceutical and/or on further contract components.

The AMNOG process regularly defines that the period of price negotiation starts after the benefit assessment.   During this time, it is the responsibility of the PC and the GKV-SV to commonly agree on the reimbursement amount for the pharmaceutical. This should happen according to § 130b para. 9 SGB V within four negotiation meetings and six months. However, sometimes at the end of this period, the two parties are still (far) apart in their ideas about the appropriate reimbursement amount or individual contract components.  The reasons for this can be manifold. However, it is usually the reimbursement amount that remains in dispute between the two parties. If this is the case, Section 130b (4) of the German Social Code, Book V stipulates that the Arbitration Board must be called, and the three-month process of arbitration begins.

How does the arbitration proceed formally?

Prof. Dr. Stefan Huster has been the impartial chairman of the Arbitration Board since July 2019. Since the beginning of the AMNOG, there have been 62 arbitration awards, seven of which were decided in 2022. However, this does not mean that only 62 arbitration processes have been conducted. The Arbitration Board endeavors to ensure that both parties exchange views again in the phase of drafting the concretizing application, but at the latest during the oral hearing, in order to agree on further aspects and, at best, to reach a final agreement. According to experience, this succeeds more often than average. It is often advantageous for both parties to reach an agreement in this way. In this way, they do not relinquish decision-making power to a third party and can influence the outcome more strongly. In addition, the arguments and discussions of both parties remain confidential.

What were the topics of the Arbitration Board in 2022?

Various therapeutic areas were covered by the Arbitration Board in the past year (see table 1). 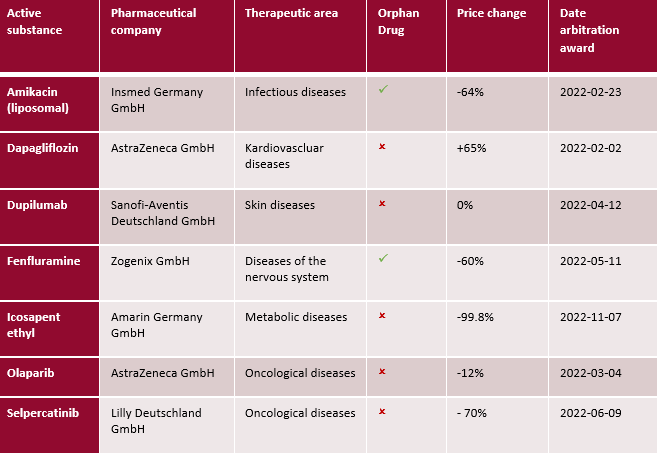 Two of these proceedings involved orphan drugs. The reimbursement amount was in dispute in all arbitration processes. The Arbitration Board decided in a single case on a price increase of 65%, in one case for no price change, and in the other processes up to a rebate of 99.8%. All of this year’s Arbitration Board decisions highlighted interesting aspects that could be relevant for future arbitration awards, but also for price negotiations (see Table 2). 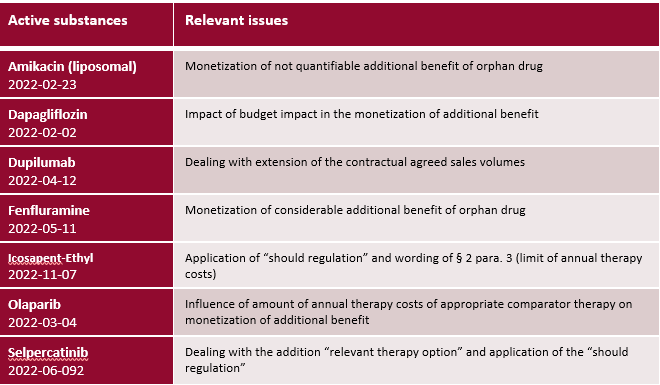 SmartStep analyzes all published arbitration awards based on various factors. This knowledge is used for the preparation and support of price negotiations. Additionally, based on this, possible scenarios for the decision of the Arbitration Board can be created.

Do you have any questions?

Simply contact us by e-mail and we will be happy to advise you.