The long road to EU-HTA: An overview of developments and challenges

This article provides a brief overview of the key challenges facing European stakeholders, looks at the upcoming development steps of the project, and asks how manufacturers of medicines, medical devices, and other new health technologies can best prepare for an upcoming EU HTA process.

As early as 1996, the European Medicines Agency (EMA) published the results of the first Europe-wide approval procedure. Following this example of success, the EU Commission took the next logical step in 2018 and presented a draft regulation that is also intended to harmonize the benefit assessment of health technologies across Europe in the future, which goes beyond the approval and has so far taken place in the national context: the EU HTA (Health Technology Assessment) procedure. Despite fundamental agreement on the need for such harmonization, a protracted dispute has since flared up between the individual member states of the European Union over the form that this should take.

The term technology assessment emerged in the USA in the 1960s in the context of innovative technologies such as supersonic aircraft and genetic screening and, due to numerous medical innovations during this period, soon found its way into the health sector[1]. as ‘health technology assessment’ or HTA. It describes a process of systematic evaluation of health technologies that, based on the available scientific evidence, enables medical decision-makers, health insurers, patients, and other stakeholders to make an informed decision about the added therapeutic value of a new health technology compared with existing therapy alternatives.

2. Benefits of a European HTA procedure

In contrast to that Europe-wide uniform authorization process of new drugs by the European Medicines Agency (EMA), the subsequent HTA – in Germany called benefit assessment AMNOG by IQWiG and G-BA – has mainly taken place at national level so far. This leads to unequal and distorted market access conditions, as national HTA procedures sometimes differ significantly, e.g. with regard to the acceptance of endpoints, or the data basis that needs to be submitted, finally resulting in the unfortunate situation where some drugs are reimbursed in one country while not being available to patients in others.

Here, a Europe-wide uniform procedure is to solve the outlined problems according to the principle: “One HTA procedure for one drug”. 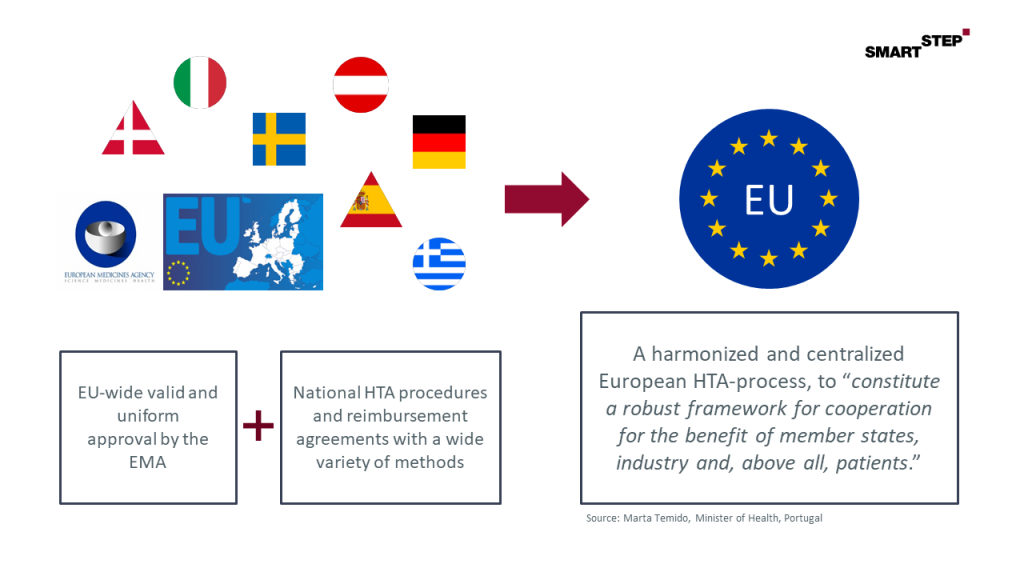 Figure: Background and rationale for a European HTA process

As early as 2018, the EU Commission presented a draft regulation, which subsequently led to intensive discussions on its design among the member states. In particular, the larger member states such as Germany and France, which already have a mature HTA system, reject the proposed draft, which extends far into national decision-making competencies. The central point of discussion is, on the one hand, the question of whether the results of procedures carried out throughout Europe must be bindingly adopted by the member states. The main concern here is that this would indirectly lower the high standards that have applied in some member states to date. In addition, a mandatory adoption of benefit assessment results would directly interfere with national decision-making authority on the reimbursement price, since this is always based directly on the result of the benefit assessment. Another sticking point is the definition of the benefit assessment methodology in the regulation. 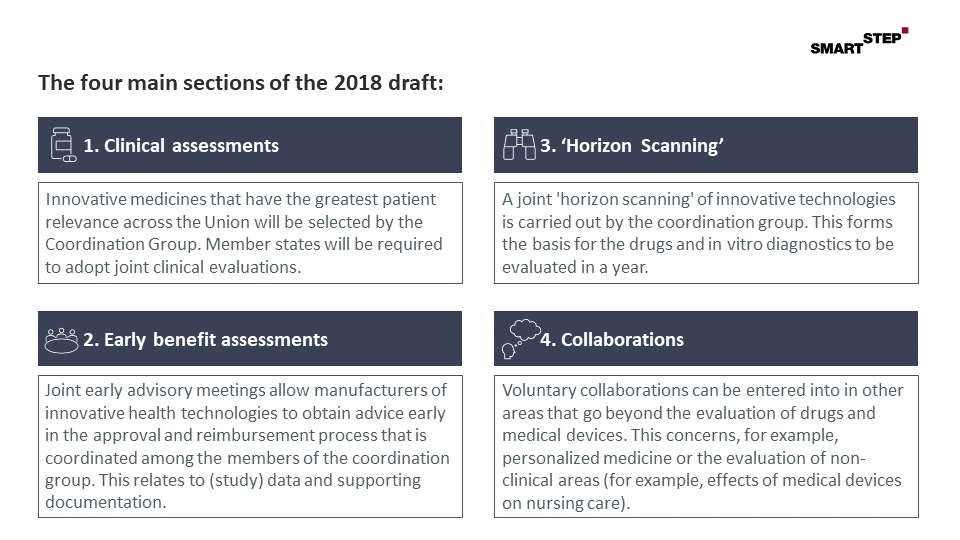 Figure: The four main sections of the 2018 draft regulations

4. EU-HTA: Course and outlook of the procedure

Also in 2018 – shortly after the draft regulation was presented, Germany and France, together with other member states, submitted a formal subsidiarity complaint, which in essence underscored the criticism previously expressed and called on the Commission to place the regulation on a different legal footing. Instead of Article 114 of the Treaty on the Functioning of the European Union (TFEU), which intention it is to establish a domestic market in the EU, Article 168 TFEU should serve as the legal basis – an article that emphasizes the national decision-making power of each individual member state by stating that decisions should always be taken at the national level if a decision at the Union level is not absolutely necessary (principle of subsidiarity).

Overall, too few countries participated to stop the legislative process, but the discussion of the criticisms raised led to a lengthy exchange of positions in the Council of the European Union, the direct representative body of the member states in the EU.

In addition to these differences regarding the content, which prevented a quick realization of the project, at the beginning of 2020 the COVID pandemic led to an additional delay resulting in a further interruption of the negotiations for almost a year and a publication of a common position of the member countries as late as in March 2021.

Finally, the member states have agreed through a common position in the Council of the European Union that the idea of a European HTA procedure should be implemented in principle. However, the main points of discussion are clearly reflected in the negotiating mandate in the form of compromises reached, which now serve as the basis for the final discussion in the European Parliament. 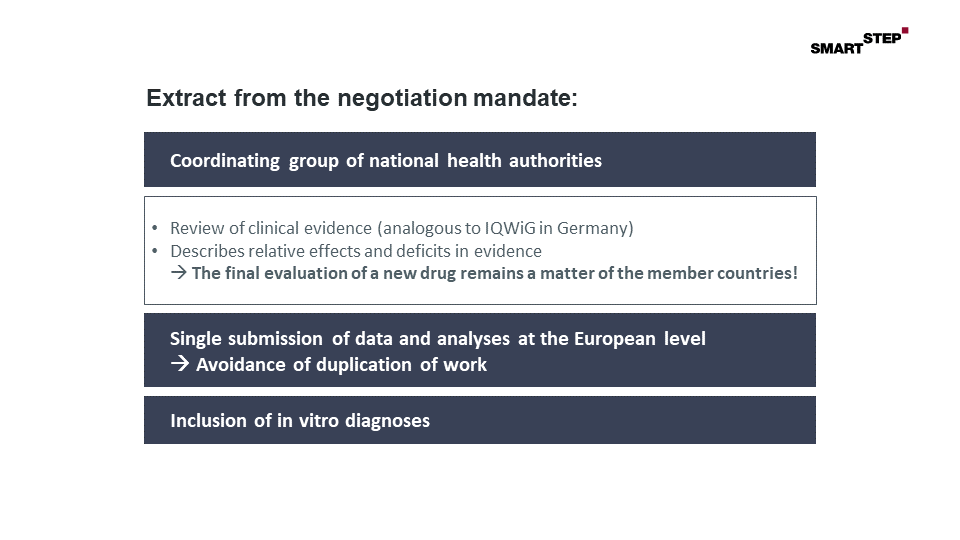 Figure: Extract from the negotiation mandate

5. When can we expect a full EU HTA and what do manufacturers need to prepare for?

More than 2 years after the EU Commission submitted a first proposal, now that the member states have agreed on a common position, all institutions involved in the legislative process – Commission, Parliament and Council – can realize a timely implementation of the project in a trialogue.

5.1 How will the EU HTA process fit into existing processes in the future?

The clinical evaluation by an EU-HTA will not and – in this respect the negotiating partners in the European process agree – should not replace the need for contextualization in the respective national health care context. For Germany, for example, a national benefit dossier will still be necessary in the future. How exactly this dossier will look like, whether, and if so, which timeline conflicts there will be with the European dossier, subsequent statements and hearings, however, depends directly on the outcome of the European negotiating partners. This also concerns the aspect of how national benefit assessments will be divided between IQWiG and the G-BA in the future. A detailed “scan” of the conceivable options in that context gives as a manufacturer the opportunity to respond quickly to upcoming developments and to bring national strategies into line with the European HTA process.

5.2 Which products are the first to be considered for an EU HTA procedure?

Both the draft regulation of the EU Commission and the negotiating mandate of the Council of the European Union suggest a gradual entry into force of the regulation. And even though the final vote on the timeline depends on the outcome of the trialogue negotiations, the consistency of the proposals made on this point make an adoption of the current Council proposal quite likely. 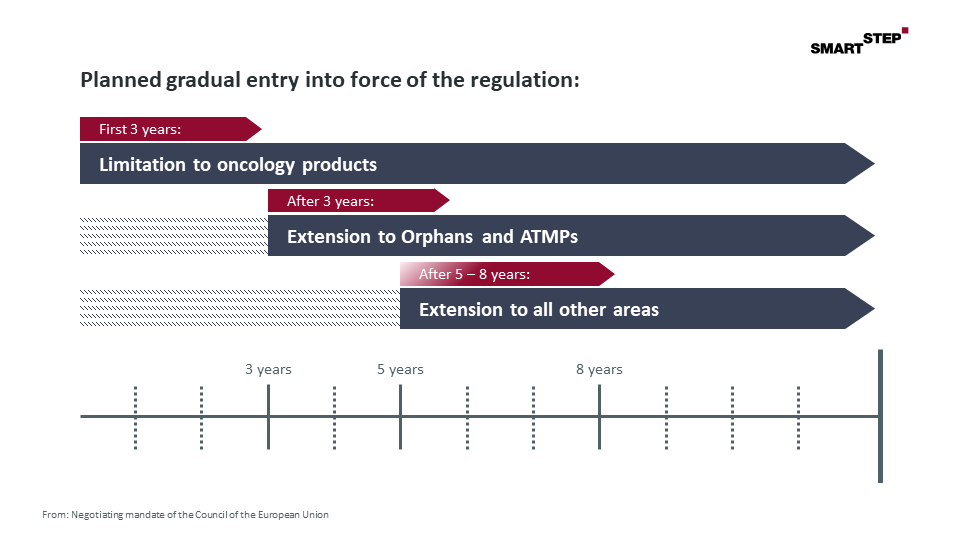 Figure: Planned gradual entry into force of the regulation

SmartStep Consulting has been intensively accompanying the development process of the EU-HTA procedure since its start in 2018. Due to extensive experience in the national benefit assessment process and memberships in several European partner associations (PHAROS, EUCOPE), we are well positioned, strongly networked and your reliable partner in the areas of market access strategy, preparation of dossiers and in early consultation. This concerns AMNOG procedures as well as future EU projects.

Just contact us by email and we will be happy to advise you!