What has happened since the DiGA fast track began? An overview of the status quo

This blog post provides a brief overview of the status quo of DiGA fast track since the DVG went into effect in December 2019.

Since the “Law for Better Care through Digitization and Innovation” (Digital Care Act – DVG) was passed just under two and a half years ago, a lot has happened in the Digital Health Applications (DiGA) sector.

31 listed DiGA in the directory

Since the publication of the DiGA directory, 31 DiGAs have been listed by the Federal Institute for Drugs and Medical Devices (Bundesinstitut für Arzneimittel und Medizinprodukte – BfArM) and can thus be prescribed by physicians and billed to the Statutory Health Insurance (GKV). Of the 31 DiGAs already listed, 12 DiGAs have been included in the list definitively and 19 DiGAs provisionally. The status of a final listed DiGA is given to manufacturers who have already been able to provide full proof of positive care effects through the use of their DiGA. Provisionally listed DiGAs are expected to provide the required evidence within a one-year trial period. 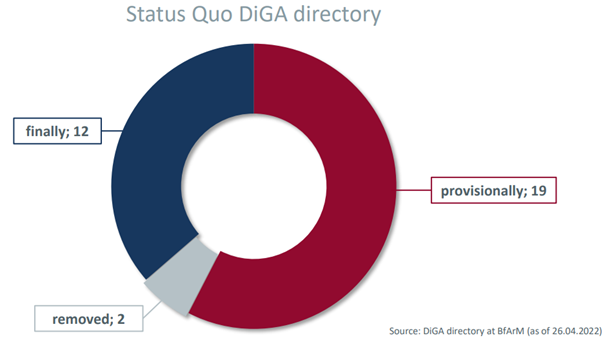 In individual cases, the one-year trial phase may be extended once for up to twelve months, but only if the manufacturer can present a justification for a later proof that is accepted by the BfArM. Six of the then 15 provisionally listed DiGAs have taken advantage of an extension of the trial period between three and six months (as of September 30, 2021). Two of the current 19 provisionally listed DiGAs were removed from the DiGA directory again in late March and early April 2022 due to data generation challenges.

After successful final listing in the DiGA directory, manufacturers and the GKV-SV must agree on a reimbursement amount, which is to come into effect after one year of free pricing and be reimbursed by all health insurance funds.  However, the necessary framework agreement on the structure of the price negotiation entailed long and intensive negotiations between the negotiating parties. The final framework agreement was finally adopted in mid-December 2021.

Since the GKV-SV and the 13 individual manufacturers’ associations were unable to reach an agreement on all points, the Arbitration Board had to determine disputed points. This primarily concerned the regulations on maximum amounts and threshold values. The final version of the framework agreement now provides for a regulation on maximum amounts for various groups of DiGA. The groups are formed based on the respective indication (ICD-10) and the category of the positive health care effect addressed (medical benefit or patient-relevant structural and procedural improvements).

The assignment of such a maximum amount group is made by the manufacturer himself and must be communicated to the Joint Agency, which then decides on the classification. The framework agreement also states that certain DiGA may be excluded from the maximum amount groups. This applies in particular to those those DiGAs whose addressed patient population includes a rare disease as defined by the Orphanet Consortium or whose main function is based on artificial intelligence.

Since the framework agreement came into force, four results of DiGA reimbursement amount negotiations have been visible to date, which had to be decided by the Arbitration Board due to a failure to reach an agreement in the scheduled negotiation period. It can be seen from the arbitration awards that the Arbitration Board chaired by Prof. Wasem based its price derivations on the logic of determining reimbursement amounts for drugs from the Act on the Reform of the Market for Medical Products (Arzneimittelmarkt-Neuordnungsgesetz– AMNOG). The extent of the medical benefit or the patient-relevant structural and procedural improvements, the comparable care context as well as the prices in European countries and self-payer prices have turned out to be essential components for the reimbursement amount. Several other DiGAs are currently under price negotiations.  It remains to be seen when the first agreement can be reached without involving the Arbitration Board.

Just contact us by email and we will be happy to advise you!